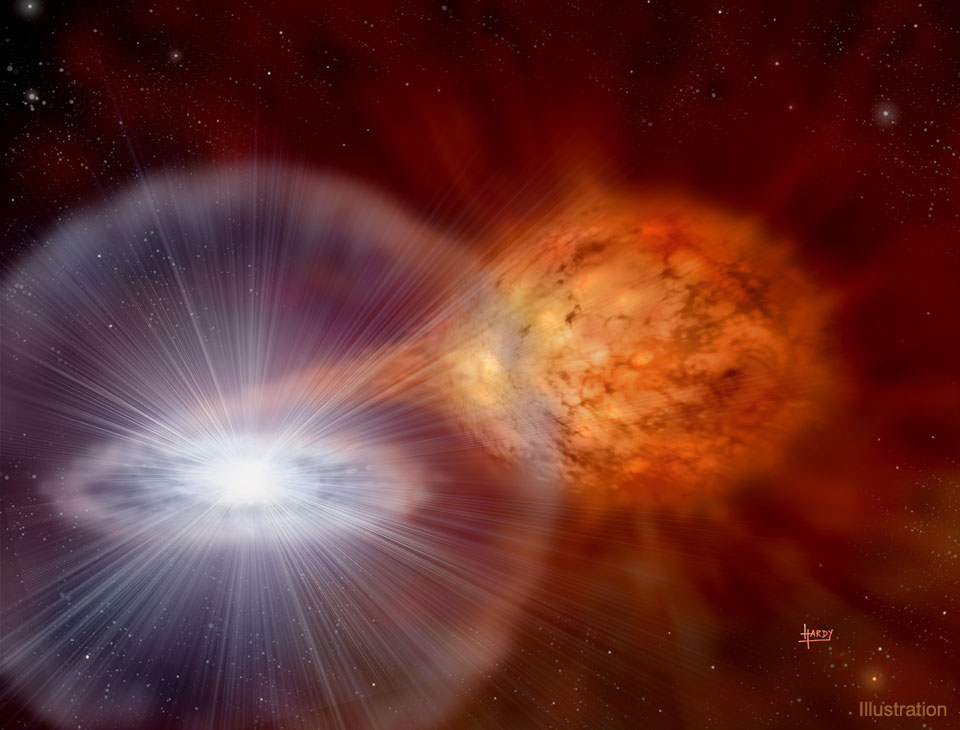 Explanation: Spectacular explosions keep occurring in the binary star system named RS Ophiuchi. Every 20 years or so, the red giant star dumps enough hydrogen gas onto its companion white dwarf star to set off a brilliant thermonuclear explosion on the white dwarf's surface. At about 5,000 light years distant, the resulting nova explosions cause the RS Oph system to brighten up by a huge factor and become visible to the unaided eye. The red giant star is depicted on the right of the above drawing, while the white dwarf is at the center of the bright accretion disk on the left. As the stars orbit each other, a stream of gas moves from the giant star to the white dwarf. Astronomers speculate that at some time in the next 100,000 years, enough matter will have accumulated on the white dwarf to push it over the Chandrasekhar Limit, causing a much more powerful and final explosion known as a supernova. Starting early this month, RS Oph was again seen exploding in a bright nova. 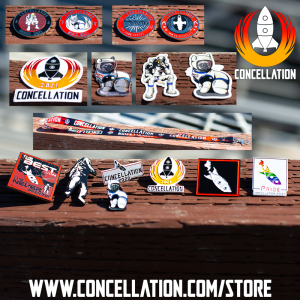 One of every available item at an impressive discount! Wow!

@ConcellationConcellation 2020
The Daily Facepalm https://t.co/3c5R4uUc3v Brought to you by our pins, coins, patches, lanyards... wow, lots of aw… https://t.co/IU9ZqFT1cx

@ConcellationConcellation 2020
The Daily Facepalm https://t.co/GLyyQbDcGh I'd say it's my secret superpower, but it's not so much of a secret. Wh… https://t.co/K9grR09QLm

@ConcellationConcellation 2020
The Daily Facepalm https://t.co/CRcCjvQLFt Sing it if you know it! PS: https://t.co/6ofhQWxua0 has everything you… https://t.co/bQBV24G3Kb
Tweet
© 2020 - 2021 Sleestaq, LLC
You are now being logged in using your Facebook credentials