Reasons to Publicize Your Award-Eligible Works

‘Tis the season when many writers blog and tweet lists of what they’ve published this year in hopes of generating reader interest and consideration for awards. Full stop. Does the prospect of preparing a social media post touting your published work cause you to twitch and shudder? You aren’t alone. Nobody wants to appear over-eager, much less set out on an unseemly quest for accolades. But self-promotion doesn’t have to be a cringe-worthy endeavor. Here’s why you should publicize your written work right now.

Your Readers Want More of Your Stories Plus a Taste of Things to Come.

The end of the year means readers are busy, busy, busy with holiday tasks, made more complicated in 2020 than usual. Do you know what they really crave? Your regular readers would love to steal some time and curl up with one of your works that they somehow missed. If you’ve produced a series of novels or shorter works or a mix of both, they’ll appreciate learning there are more for them to devour. Meanwhile, other readers would love to discover an intriguing new writer who speaks to them. Now is the time to help every one of them find your work.

If your novel or shorter work came out ten or eleven months ago, it’s easy to despair at how it sank with barely a ripple, given everything that happened afterward. If it was published in the middle of the pandemic, well who can blame people for not focusing on it? If it was released toward the end of the year, how many valiant readers had a chance to find it and read? The fact is, there’s never an ideal time for our work to reach its audience. All we can do is gently and persistently remind people that we made these things and maybe they should give them a try…at least the first few paragraphs or chapter. Consider, too, you can build anticipation for your next work, whether it’s soon to be published or still in the writing stage. Even if you can’t disclose all the details, you can tantalize!

Award Eligibility Posts Are for All Writers, Not Only the Big Names.

Don’t believe me? Consider how many writers won a Hugo, Nebula, World Fantasy Award or another prestigious literary prize with the first story or novel they ever got into print. Think about the “newcomers” awards such as the Astounding Award for Best New Writer given to someone whose first professional work was published during the two previous calendar years. It’s been a springboard launching a number of careers. Also, keep in mind that your audience may nominate and/or vote on readers’ choice awards given by Analog, Asimov’s, Clarkesworld, and other periodicals.

By now, some of you are saying to yourselves, “Why bother when I’ll never win an award…or even be nominated. Or if I am, it’ll be as a list filler.” Others are thinking, “I only published one story. It came out in an obscure publication.” Then there’s, “My novel didn’t sell all that well,” not to mention the perennial, “The reviewers don’t know my book exists.” Are you thinking about waiting until…what? You’re better known? You sell more copies? You get published in a top market? Your sales figures improve or your social-media following grows? Your work attracts a glowing review?

To every one of your objections, the answer is the same: Your fiction merits more attention right now. Even in better times, writing is a difficult enough business without running ourselves down. As writers, we are notoriously NOT the best judge of our own work. We’re too close to it. Sometimes words flow quickly and effortlessly. Other pieces fight us for every sentence we succeed in wringing out of them. Critical and popular acclaim aren’t tethered to the ease or difficulty of creation. Besides, our assessment of particular pieces may evolve as we gain the advantages of time and distance. In short, you never know how a story will fare.

You Can Self Promote Without Brazen Egomania.

It’s actually rather straightforward. All you need is a brief year-end retrospective listing:

The titles of each of your works; Genres, including sub-genres like military science fiction, epic fantasy, which may determine award eligibility; Publishers and/or publications; Links, links, links to make it as easy as possible for busy, distracted would-be readers to find your creations; Categories: novel, novella, novelette, or short story; Optional: An indication of your personal favorite, seeing as your stories aren’t children who’ll get upset when you play favorites. Make It About More Than Your Writing.

Still feeling uncomfortable with an award-eligibility piece? Try one of these:

Make it a class project by combining your write-up with those of your other writer friends. Invite people in your critique circle or with whom you bonded at a workshop or convention. Combine it with a list of recent works by others that you loved reading or watching. Your readers will appreciate the recommendations. Share some of your other interests with your readers. Whether this includes a new-found love of baking, wood working, growing succulents, collecting miniature models of horses, putting together flower arrangements, or something else, here’s your opportunity to show what interests you pursued this year when you weren’t writing.

Look at it this way. If your day-job supervisor requests a recap of your accomplishments for a performance review, you don’t respond by saying, “Oh, I don’t want to toot my own horn.” If you own a business, you don’t refrain from advertising your goods or services to customers or clients. For writers, our bosses and customers are our readers. They draw comfort from learning that we’re still writing and look forward to digging into the worlds and people we have to offer. 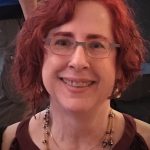 Rosemary Claire Smith’s interactive adventure novel, T-Rex Time Machine, is available from Choice of Games. She’s an award-nominated writer whose short fiction and essays have sold to Analog, Amazing Stories, Fantastic Stories, Drabblecast, Hybrid Fiction, Stupefying Stories, Digital Science Fiction, and various anthologies. Her writing draws on her background as a lawyer and field archaeologist to showcase her interests in mythology, aliens, alternate history, space exploration, and time travel to the heyday of the dinosaurs. She’s been blogging at rosemaryclairesmith.wordpress.com/blogging-the-mesozoic for the past 156 million years. Follow her on Twitter at @RCWordsmith or Facebook as Rosemary Claire Smith.

The post Reasons to Publicize Your Award-Eligible Works appeared first on SFWA.

Writing Through the Terrible Twos

Explicit Sex Scenes and the Work of Stories

@ConcellationConcellation 2020
Connecting the Dots https://t.co/OxnB7ofpzs Please excuse our construction dust as we make this post to verify tha… https://t.co/NZsWQRFgVN